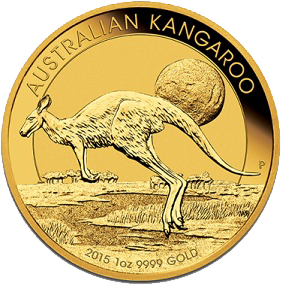 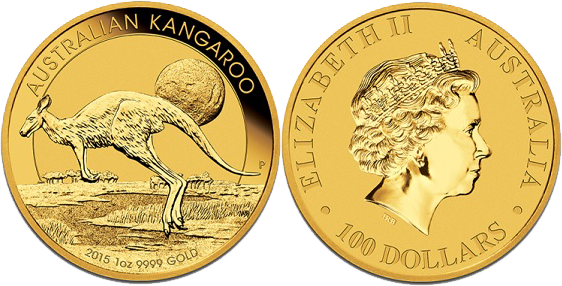 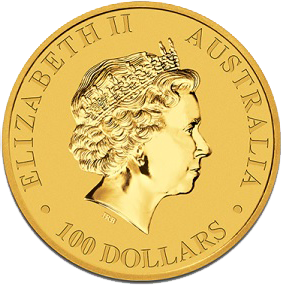 The first few things people get reminded of when they think of Australia are wildlife, Aborigines, lush rainforests, rugby and cricket teams, etc. Animal life, in particular, is quite rich and diverse. Kangaroos, koalas, wallabies, dingos, wombats, echidnas, and platypi are some mammals that inhabit the massive country. Despite this rich wildlife, people outside Australia and some Aussies perceive the nation as the land of kangaroos.

And one cannot blame them for having that mental image since Australia has never missed an opportunity to showcase itself as the “land of kangaroos.” The multi-legged marsupial can be found on or linked to everything Australian, from souvenirs to baggy green cricket caps. Not to mention, the kangaroo is the national animal of Australia. Unsurprisingly, Australia’s coins also have kangaroo reminders—for instance, the Australian Gold Kangaroo coin.

The Australian Kangaroo coin is a popular bullion coin in and outside Australia. Its focus on Australian culture and identity through its design makes it quite coveted among the Aussies. And people who want to own a piece of Aussie heritage flock toward the coin too. The currency is pure gold, pulling in precious metal coin collectors and investors. If you’re an investor or saving for retirement, it pays to know more about the coin.

In this article, we discuss:

Australia has no dearth of investment-friendly coins. But not all of them are as special or have as much pedigree as the Kangaroo coin. Read on.

About the Australian Gold Kangaroo Coin

Also called the Australian Gold Nugget coin, the Australian Gold Kangaroo coin is a 24-karat gold bullion coin. Minted by the Perth Mint annually, the currency enjoys “legal tender” status in Australia. The coin comes in multiple sizes and has an iconic design, which is ever-changing. The Australian legal tender has had several special editions, alongside one that entered the Guinness Records for the largest gold coin ever minted—more on the humungous coin later.

Technically, the Kangaroo gold coins were officially introduced in 1989. But because the coin is a modification of the Australian Nugget coin (minted between 1986 and 1989), it’s safe to say it started its journey in 1986. Before that, the Perth Mint made the coin with gold nuggets inscribed on the reverse. To not completely abandon the “nugget” connection, Kangaroo gold coins use the term “NUGGET” in the description on the rear side. But not all Kangaroo coins bear that moniker.

And there are three non-conventional sizes: 2 oz, 10 oz, and 32.5 oz (2.2 lb). The Perth Mint introduced them in 1991 to ensure low premiums, thanks to economies of scale. Their face values are in proportion to the more traditional Australian Gold Kangaroo coins. The following are their physical measurements.

The above three variants are among the most significant gold coins minted and produced in relatively limited quantities.

Talking about large-sized coins, the Perth Mint made a 1-tonne pure gold coin in 2011, making the coin the largest and most valuable gold coin. The Guinness Book of World Records awarded it the largest coin title in 2012. The Royal Canadian Mint’s Big Maple Leaf held the record for the biggest gold bullion coin until then.

The Perth Mint’s goal behind producing the 1-tonne coin was to create more awareness about Australian gold coins, particularly the Kangaroo coin. Therefore, before being kept for display permanently at Perth Mint’s Gold Exhibition, the humungous coin visited the United States, Europe, and Asia. The coin is approximately 12 cm thick and 80 cm diametrically. The coin’s face value was set at A$1 million, but the actual value was around A$53 million.

Why Invest in the Australian Gold Kangaroo Coin?

Australian Gold Kangaroo coins have been trusted for their weight and purity by investors across the globe for decades. It’s a 24-karat gold coin with a very high purity level. Another draw is the dynamic design. The yearly design modifications make each issue look different from previous coins, keeping the coin’s weight intact. Many investors own multiple Kangaroo gold coins to collect the latest designs. This makes the coin a lot more investment-friendly.

Paying homage to Queen Elizabeth II, the coin’s obverse side has the right profile of the Queen. The inscriptions include the Queen’s name, the word “AUSTRALIA,” coin face value, coin size and fineness information, and year of production. The coin’s reverse side depicts a kangaroo(s) bounding on grasslands. The reverse side design, however, is subject to change each year. The coin’s flip side also bears the minting date and purity details.

Coins minted between 1986 and 1989 bore gold nugget imagery. After 1989, the nugget was replaced with kangaroo depictions. It’s not clear why the kangaroo replaced the gold blobs. But it’s believed the kangaroo is more symbolic of Australia than the gold nuggets. Moreover, the gold nuggets were not tricky to discern, looking more like meteorites or dirt globs.

The Kangaroo gold coin undergoes design changes almost every year. Although there’s no major haul (except for the shift from nugget imagery to depictions of kangaroos), minor modifications are made to the design annually. The 1 kg (2022) version of the coin showcases a bounding Osphranter rufus (red kangaroo) stylized by sunlight rays.

On the other hand, the 2 oz (2022) version has the classic kangaroo leaping across grassy outback plains with hills in the background.

An aspect of the coin’s design that has remained consistent over the years is the frosted “two-tone” effect—which can be seen on all versions, including the smallest variants. Regular bullion coins are usually devoid of this effect, which is typically relegated only to special editions of a bullion coin series.

The Kangaroo gold coins are 24-karat or 99.99 pure gold. The purity has been the same since inception and across all coin versions, including the special editions and larger sizes.

The Australian Gold Kangaroo coin has proof coin sets too. For those unaware, a “proof coin” is a unique preliminary sample of a particular coin’s issue. It’s usually made to inspect the dies and to archive. The term “proof” denotes the coin’s finish, which is generally superior to the regular coin’s look.

Unlike most other bullion gold coins minted annually, the mintage of the Australian Gold Kangaroo coins is limited. The limited yearly production and the everchanging design lend the coin a greater numismatic value. In other words, the currency invariably trades for a price higher than the spot price of gold. And if you’re particular about the coin’s value, keep it encased in its clear hard plastic case that it shipped with. Any dents or scratches can considerably knock down its value.

Since Kangaroo coins are globally recognized, shopping for one should not be an issue anywhere. The larger variants of the coin, particularly the 10 oz and 1 kg variants, are usually hard to find outside Australia. To buy the coin online, head to the official Perth Mint store. Other reputable online stores include GoldCore, SD Bullion, and Suisse Gold, to name a few.

These stores ship the shipment box once the payment for purchase is made. You may even sell the coin back to these stores by shipping it with its box and original packaging. Once the store receives delivery of the shipments, it will pay you the already agreed-upon price.

Which Australian Gold Kangaroo Coin Variant Should You Buy?

It’s usually recommended to buy the biggest size that’s affordable. And the same mantra holds good for the Kangaroo coin. See if you can buy the 1 oz gold coin since it’s more popular. Also, it’s more value for money. The amount of work that goes into the coin’s design doesn’t change with its size, except if it’s a special 1 kg coin. As the size increases, the money goes more toward paying for the gold, with artisanship costs remaining the same. Buying anything more significant could dent the coin’s liquidity aspect. If budget’s a constraint, consider the smaller versions.

Gold coins come in different sizes and designs. Only a few truly stand out at the global level. The Kangaroo coin is undoubtedly one of them. The Australian Gold Kangaroo coin should be high on your wishlist if you want to invest in physical gold and appreciate beautiful designs with heritage thrown in for good measure. The 24-karat makeup means it’s worth its weight in gold.

The coin’s famous worldwide, which boosts its trade and liquidity. And because the currency is eligible for a precious metals IRA, you can also buy the gold coin with retirement savings in mind. The coin is available in multiple sizes and at various price points, making it convenient to add high-quality gold to your portfolio without breaking the bank. 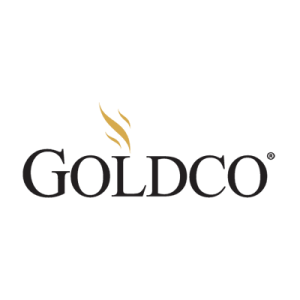 The Australian Gold Kangaroo coin is IRA eligible, thanks to its 24-karat makeup and Perth Mint origin. The Perth Mint is recognized by COMEX (the New York Commodities Exchange). If you didn’t know, a gold coin or bullion bar should be COMEX or NYMEX-approved to qualify for a precious metals IRA.

The Australian Gold Kangaroo coin is a good investment if you buy it for the right price, size, and from a reputable retailer. Needless to say, the above attributes indicate the coin has many benefits.

The Australian Gold Kangaroo and the Canadian Gold Maple Leaf coins originate from different mints, countries, and continents. Regarding similarities, both are 24-karat pieces. They also bear the image of Queen Elizabeth II on the obverse, albeit not identical.
The Kangaroo coin has a security feature like the Maple Leaf coin. The latter has a micro laser-engraved letter for identity and authenticity in the mini maple leaf on the rear. The Kangaroo coin employs a similar laser-engraved letter, hidden in the term “AUSTRALIAN KANGAROO” inscribed on the coin’s rear side. The letter is usually a “P,” or an “O” concealed behind one of the letters.
As far as differences go, the reverse sides of the coins are completely different. The Maple Leaf is symbolic of Canada, whereas the Kangaroo coin indirectly communicates that Australia is the land of the roos.

How can you tell a fake Australian Gold Kangaroo coin?

What is the Australian Gold Kangaroo coin worth?

The Australian Gold Kangaroo coin is worth its weight in gold. The coin’s value could vary based on the coin’s size and the spot price of gold. Get in touch with a reputable precious metals dealer to learn more about the coin’s real-time worth.

Is the Australian Kangaroo coin available in other precious metals?